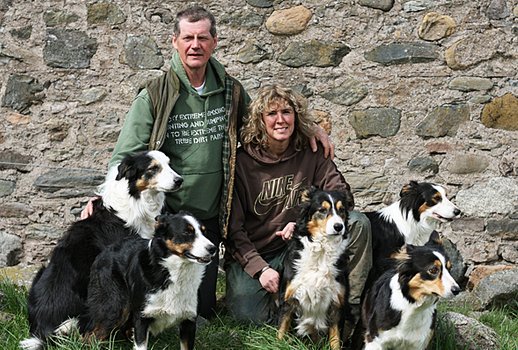 Six years ago we both started to feel that Sweden was a bit too crowded for us and we wanted challenges that spiced up our everyday life. So, we decided to sell the animals and machines on our farm in Sweden,to realize our dream of working with herding dogs in their native country Scotland.

During the last couple of years we've taken care of Ardormie Farm with 500 Easy Care sheep.

In december 2015 we're moving in to Midderry Farm that we bought together with our friends Lasse & Barbro.

We train sheepdogs for work, trials and breed/buy in young dogs that we train to later on sell them to farmers & contestants. We put a lot of time in each dog so that we can find the right dog for the job and the handler!

Please contact us if you have any questions / Mosse & Lotta

Scottish team member 2014, placed third at the International with Davey

World trial 2014 , final with both Jim and Davey

place 16 with Davey the same year .

Isle of Man champion with Davey 2013

Winner of the qualification at Continental 2008

Sixth in the final at World Trial 2005 in Tullamore, Ireland

Since we arrived to Scotland we both have won a number of open trials.

During our first two years here we had together about 70 placements at trials (top six) and around 10 of them are winnings!

Mosse and Lotta are both very good instructors and have a lot of experience with sheepdogs.

If you want to book a private lession or a group clinic, please call or email to set a date.

Classes can be held here on the farm or at your own place!

- Both Mosse and Lotta are very good with dogs and they just make your whole world turn upside down when it comes to sheepdog training. Suddenly everything is very easy to understand, and you get the right tools to get the very best out of your dog!